As social networking sites such as Facebook and MySpace continue to grow in popularity, so does the interest from prospective employers. With almost 4 million Australian users on Facebook alone, there is information aplenty to be discovered about job applicants and current employees.

In the past it was not uncommon for an employer or recruitment agency to Google an applicant, but social networking has taken the online check to an entirely new level. Recreational drug use, binge drinking, sexual exploits, inappropriate pictures, and extremist views all get posted publicly on social networking sites, and some simply do not make use of the networks privacy settings.

Whilst this kind of check is unlikely to yield results relating to a persons ability to perform a specific job or task, it may give an insight into a person’s character, and it’s not always looking at the negative. Many positives may arise from the information garnished, and even something as simple as the absence of questionable material starts to present a case for good judgement after you’ve seen a few.

So what if you do find out something about a job applicant that troubles you? Perhaps their judgement and character is now in question. Is this grounds for not hiring them, or could your actions be considered discriminatory? You may need to consider your options very carefully before making any decisions based on a social networking profile.

Checking on the profiles of current employees is also a rising trend amongst employers. What were they really doing on that day off? Were they really sick, or just sick of working? It may at times even reveal almost comical results, as the below picture displays. 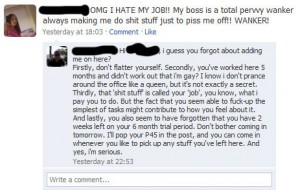 Whilst the increased use of social networking checks will never replace a comprehensive background check, it may soon become a common factor of one. So what does your profile say about you?

Editors Note: We first published this article way back in 2009 and quite a bit has changed since it was written. As noted originally it has become common place, but now there’s a lot more to it. When we next get a chance we’ll bring you a more up to date version.. Until then, good luch with your search.

You have Successfully Subscribed!